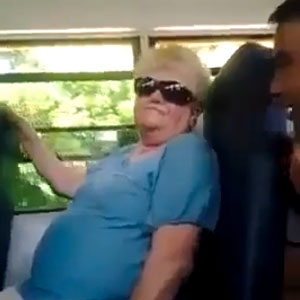 “Put your glasses back on. I can’t stand looking at your face,” another student chimes in.

A 10-minute cell phone video – filmed by another student on the bus – shows that as the insults continued to fly and became increasingly vulgar, Klein sat quietly in her seat and cried.

Caution: This video contains offensive language. Use discretion before viewing.

“I was trying to just ignore them, hoping they would go away – and it doesn’t work,” Klein told the Rochester Democrat and Chronicle. “Trust me, they didn’t go away.”

The video was uploaded to YouTube June 19 and was viewed more than 1.5 million times by June 21, the Democrat and Chronicle reported, which encouraged people to start a fundraiser for the bullied Klein.

On June 29, the four students who bullied Klein were suspended from their Greece, N.Y. middle school for one year and must also complete 50 community service hours, according to CNN.

Although this story has come to an end, is there still something parents can take away from the incident? Could the bullying of the elderly Greece, N.Y. bus monitor provide an opportunity for a “teachable moment” in your southeast Michigan household about bullying?

There are a whole slew of possible reasons why children bully others.

According to the National Crime Convention Council, a child might bully if he or she likes to be “in charge” or is a “sore loser.”

Dr. Tiffany Boards, a psychologist at Peace of Mind Child & Family Psychological Services in Redford Township, says a child might bully if he or she is lonely, or is experiencing depression or anxiety.

“There’s definitely something going on with the child who’s bullying,” she says. “It’s common sense that if somebody is feeling good about themselves, they won’t make others feel bad about themselves.”

Boards also says kids might bully because of aggression they’ve picked up in the home or from examples around them. These examples could come from a sibling, arguing parents or violent television programs, she says.

How to correct bad behavior

One reason kids may continue to bully is because of the attention they’re receiving for doing so – whether it’s negative or positive, Boards says.

“People give bullies attention, and that’s their way of being seen. They’ve somehow been reinforced,” she says, even if it comes in the form of “an adult person reprimanding them for their inappropriate behavior.”

So then, what can parents do?

Boards says there should be limits and boundaries set for kids – and there “definitely needs to be some sort of consequence.” But with that should come a lesson on “what can be done differently.”

She suggests that after negative attention is given in the form of a consequence, there should also be positive attention. Try asking the child what the right thing would have been to do instead, she says.

An example of positive reinforcement following the New York bus bullying incident could have been to have the kids “spend time with the bus driver in a positive way,” she says.

Other ways to scale back the bullying is to monitor what kids are seeing at home. If parents are arguing, they should close the door, Boards says, and monitor what kind of TV their kids watch at home.

The NCPC also suggests parents sit down to talk to a child who is bullying to find out what they’re feeling and why they’re bullying, and talk to them about how it feels to be on the other end of it.