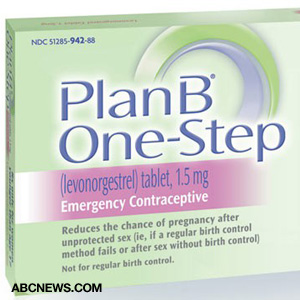 Teen girls as young as 15 can now purchase the Plan B One-Step contraceptive over-the-counter, thanks to recent approval by the U.S. Food and Drug Administration.

The new rule on availability of emergency birth control, which was announced April 30, has received plenty of flack from religious groups and created mixed reviews among parents. Doctors note that the Plan B One-Step pill does not present any dangerous or long-term threats to its users.

Until this time, the Plan B One-Step pill was only available to women ages 17 and older without a prescription and had to be obtained at the pharmacy counter.

Now, any girl 15 and up can find the emergency contraceptive in the women's health or family planning aisle – provided they show proof of age.

Plan B One-Step is one of three emergency contraceptive drugs marketed in the country, the FDA notes – and the only one affected by the new regulation. Here are some fast facts

Again, the new FDA regulations for buying Plan B One-Step do not apply to the other two forms of emergency contraceptive.

Outcry on both sides

There's a bit more at play than the FDA decision. It was made after a New York federal judge ruled, earlier in April, that all age limits should be lifted on OTC emergency contraception. That means girls of any age would be able to purchase emergency contraceptive as easily as they could buy aspirin.

Last week, the Obama administration appealed that order. As of this writing, the judge, Edward Korman, had refused the government request. The jury is out, but the legal action has caused anger from multiple fronts.

Among those opposing the judge is Susan B. Anthony List, the Washington, D.C.-based pro-life organization.

"Teen girls need parents, not unfettered access to abortion-inducing drugs," said SBAL president Marjorie Dannenfelser in a statement. "Judge Korman's decision is reckless and denies girls the protection that comes along with the involvement of parents and doctors."

Meanwhile, organizations like Center for Reproductive Rights – the group whose lawsuit sparked the judge's decision – have countered that the FDA policy doesn't go far enough, and are unhappy with the Obama appeal.

“Women who urgently need emergency contraception have been delayed in getting it or denied access entirely for more than a decade," Nancy Northup, president and CEO of the center, said in a statement, pointing at politics.

Keeping it in the family

When it comes to preventing pregnancies in teens ages 15-19, the Centers for Disease Control and Prevention offer a variety of approaches. One of its goals is to increase the length of time kids abstain from sex in the first place. What's the No. 1 parents can do to prevent teen pregnancy?

"Talk!" says Desiree Cooper, director of community and media relations for Planned Parenthood Mid and South Michigan. "We hope people learn how to talk to their children. Ninety-seven percent of what Planned Parenthood does is preventative healthcare."

It may be uncomfortable to discuss, Cooper says, but "teens really rely on their parents for role modeling. They really do want to hear from their parents about sex and sexual responsibility."

While no parent wants to think of her young daughter as being sexually active, when it comes to the discussion of birth control, Cooper prefers to think of things in another way: "If your daughter was already sexually active and had unprotected sex, would you rather her wait to see if she is pregnant or avoid that situation altogether?"

To that end, Planned Parenthood offers information on contraceptives, as well as how-to videos for talking to your teen about sex.

Whatever your approach to the sex discussion is, education about birth control methods can have drastic effects on the well being of young adults, experts say – and their ability to determine whether or not they are ready for the responsibility that comes with having sex.

According to the CDC, 2011 statistics show teen pregnancy is declining. With more prevention and discussion on the home front, perhaps those statistics can continue to drop.