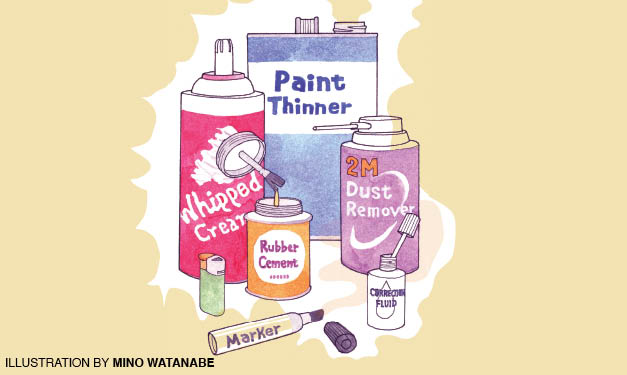 Sniffing. Snorting. Dusting. However you put it, inhalant abuse is a big problem. Some 22.5 million kids under age 12 have done it to get high at least once, says a 2012 study in Addiction Science & Clinical Practice – and every year, 750,000 use inhalants for the first time.

This practice involves breathing a commercial product's noxious fumes from its container. Users place a rag soaked in the substance over their mouth or nose and "huff" – or pour it into a plastic bag and inhale, aka "bagging."

"The chemical vapors get absorbed in the bloodstream and cross the blood-brain barrier into the cerebrospinal fluid," explains psychiatrist Brian Espinoza of St. Luke's Behavioral Health Center in Phoenix, "which circulates around the brain and the spinal cord." Once vapors hit the brain, users feel light-headed, dizzy and elated for just one to two minutes.

Beyond being physically and psychologically addictive, inhalants cause memory loss, hallucinations, slurred speech, heart problems, kidney failure and dementia, to name a few. They can be a gateway, too: Studies show kids who abuse them early on are more likely to use other illicit drugs later.

"It doesn't matter how strong your heart is or how healthy you are; everybody is susceptible," says Harvey Weiss, executive director of the National Inhalant Prevention Coalition. Because inhalant deaths are often attributed to other causes, such as poisoning or drowning (using an inhalant then holding your breath under water can intensify the high), it's unclear how many kids die from inhalant abuse in the United States each year.

Sniffing glue, paints or the contents of aerosol spray cans are the most common methods, the Centers for Disease Control and Prevention says. But the list goes on.

"There are over 1,400 products that can be abused, from the propane in your backyard grill to the cleaning supplies under your kitchen sink," says Colleen Creighton, executive director of the Alliance for Consumer Education. Because these products are so accessible, pervasive and cheap, they're often the first substance a child will try.

It's impossible to rid your home of every possible inhalant. But there are ways you can help prevent abuse – and its potential.