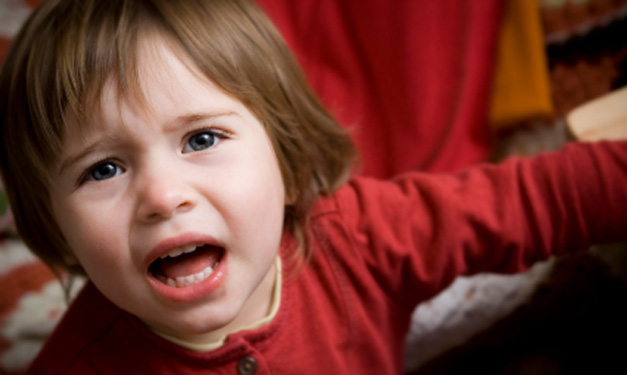 Two-year-old Trevin has perfected the great toddler art of whining to try to get what he wants. But his mom, 38-year-old Michelle Steinhebel of Macomb Township, has the most potent weapons in her parental arsenal: awareness and patience.

"Sometimes at 5:30 in the morning, he’ll want something ludicrous – like a piece of chocolate. That’s a no-brainer. ‘No.’ Plain and simple," Steinhebel says. "So I give him options. I tell him that he can have a bowl of Cheerios or some waffles. And I will keep offering the same options until he either accepts one of them or goes into a full tantrum."

Steinhebel says that about one out of every three times, Trevin accepts one of the options presented. "A lot of it depends on if he is over-tired or hungry," she says.

That awareness, says Pamela Davis-Kean, assistant research professor in developmental psychology at the University of Michigan, is key for parents to survive this difficult stage – and can make things more bearable for your child, too.

"Parents need to know when they take their kid to the mall or to restaurants, these behaviors can occur if the child is tired or hungry," she says. "They need to be aware of the time of day. Is it snack time? Is it dinnertime? If so, take care of the need."

Be prepared when going out. Consider how long you plan to be, and prepare accordingly with snacks. Be sure to take a stroller or baby carrier of some sort, so your child can rest when he or she becomes sleepy. Remember that when kids express their need for rest and sustenance, that’s not bad behavior.

Patience is important when your toddler begins to whine, especially if the episode becomes a public display. Simply telling your child to stop – or spanking – won’t work, because he doesn’t understand what he’s doing.

"They aren’t doing it to embarrass you. They are expressing themselves when they are frustrated, just like we do," Davis-Kean says.

If you’re in the middle of the grocery store when things get rough, be prepared to immediately pick up your child, push the cart to the side, and take your child to the car. You’ll end up giving in, otherwise.

"Give your child a reason, explaining why you are outside," Davis-Kean says. "Explain that the behavior is unacceptable, and tell them you will not be going back inside until they have calmed down. But parents need to actually do this and follow through."

It’s a common mantra heard throughout preschools – and a phrase that Davis-Kean recommends becomes a part of every toddler parent’s lexicon. When the whining starts, react calmly and patiently, simply asking your toddler to use words, not emotion, to express what he or she wants.

But keep in mind that at this stage, your child won’t know all of the words he or she may be searching for. So it’s important to offer choices. Would he like a glass of milk? To take a nap? To sit down and read a storybook?

But remember: If the whining is prompted by child trying to get his or her way, don’t give in. That, says author Ann Douglas in her book The Mother of all Toddler Books, is a sure-fire way to teach your child to whine longer the next time.

In fact, to cement the lesson that whining isn’t the appropriate way to communicate, be sure to pay attention to your child when he or she stops whining. This will teach your child the benefit of expressing his or her feelings with words – and not emotion.