The Ups and Downs of Work at Home Moms

More moms are earning a living right from home, doing work while always being there for their kids. Is being a work-at-home mom the best of both worlds? 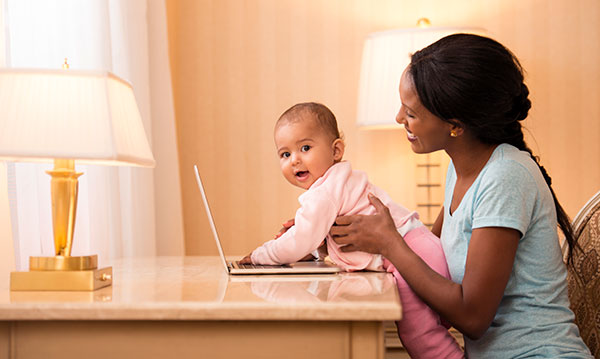 In college job interviews, when I was asked the standard “Where do you see yourself in five years?,” I trotted out a variation of this: “Working from my laptop on a beach with my kids.”

Looking back, it was a terrible answer, implying a lack of ambition and faulty corporate loyalty, but it was my vision, so I put it out into the universe.

Fast forward to today, and while it took a lot longer than expected, I’m “living the dream.”

Several years ago, after working full-time in newsrooms since college, I officially joined the ever-increasing ranks of the Work-At-Home Mom.

Getting there took a few happy accidents, lots of soul searching and a super supportive husband, but I’ve since managed to cobble together a respectable income through freelance writing jobs for a wide range of clients. And while I haven’t exactly earned beachfront cred, I have been known to bring my laptop onto the deck overlooking our modest lake while the kids play in the sandbox. Not a bad life.

I no longer worry about long commutes, child care bills and heartbreaking stretches of time away from my kids. If my son wakes up with a fever, I keep him home from school. When my daughter needs a snack, a nap or a quick game of “pony unicorn,” I’m there.

But there are new issues – namely the stress that comes with trying to balance clients, the day-to-day chores of a lived-in house, and the seemingly constant, sometimes claustrophobic demands on my time and attention.

Still, I wouldn’t trade it for the world, and thanks to technology, and modern “slow parenting” sensibilities, a growing number of moms seem to be making the same choice as me.

Of those, 7.3 percent reported the reason for staying home was to coordinate their schedule with personal or family needs.

More recent statistics are hard to come by, but the demographic is no doubt on the rise. The ranks of WAHMs I know personally are certainly growing. My sister-in-law, Jen Von Buskirk, recently launched the successful catering company Jeni’s Ugly Pies out of her oven in White Lake. A close acquaintance, Tania Kushner Rock, traded her position as Attorney Geoffrey Fieger’s secretary to set up shop as a freelance paralegal from her house in Macomb.

My former co-worker Stacy Jenkins at one time edited the Farmington Observer from her kitchen table while daughter Abby and son Evan, are at school. In 2009, the company furnished her with a mobile office, and began loosening the reins. Jenkins says she loved being there for her kids, but the downside is there’s no clear-cut time to clock out.

“My kids are constantly telling me to get off my computer because what I don’t finish during the day, I’m tempted to do in the evening. A curse of working at home is it’s really hard to turn it off, walk away and be done for the day,” she said at the time. “There are pros and cons, but I’m making it work and I love it.”

Wendie DeLano is a professional photographer who took on a second business out of her Livonia home. She’s like many moms who supplement their income with direct selling, becoming a rep for jewelry and accessory company Stella & Dot.

DeLano says she alternates between being completely stressed out trying to juggle her two jobs and two children and feeling “lazy” for foregoing professional work for housework.

DeLano has developed certain techniques to combat procrastination, such as scheduling strict office hours for herself, keeping all her materials carefully organized, and devoting Monday mornings to booking parties and photo shoots. She also partners with a nearby mom to trade babysitting for snatches of work-time.

“You really have to dedicate certain office hours when you are by yourself because it’s just too hard to grab a couple minutes here and a couple there,” she says.

Although it can be hectic, DeLano says she wouldn’t have it any other way – for now.

“I love it because this is where I want to be. They’re only little for so long,” she says.

“I loved my job, but we started doing the daycare thing and I was a month or so into it and realized ‘something’s got to give,'” she says. “On a whim we ran the numbers and tried to figure out if we could do just with my husband’s income.”

For a while, Weber focused solely on launching her mom blog, MrsWebersNeighborhood.com, but soon started to miss having her own income. Now she works for Birmingham-based Hay There Social Media, serving a roster of clients from home using an iPhone and laptop.

“I literally work wherever we need to go. Out in the backyard, my little one is running around digging up rocks, whatever she can find,” Weber says.

She’s not the only mom employed by Emily Hay, who founded Hay There in 2010.

“There are about four or five moms working there. We do our weekly calls on Skype, and you’ll see the kids popping in and out of the screens. Sometimes we have to mute because the children are screaming,” Weber says. “(Emily) wants everyone to have her work-life balance … that’s kind of her thing.”

Donna Albrecht of Brighton spent nine years working from home doing psychological transcription. For her, it was a way to get back into the workforce after a stint as a SAHM, but still be available to her young children.

But when the kids got older, it came time to get out of the house. Today, Albrecht works two part-time administrative assistant jobs, at an elementary school and salon.

While she misses having control of her own schedule, being a WAHM served its purpose.

“Working from home had done what I wanted it to do, but it was time to get back into the (traditional) workforce again,” she says.

And working at home isn’t for everyone, she says.

“It helps to be kind of an introvert, satisfied at home,” she says. “If you rely on being around other people to keep you happy, you won’t be.”

Isolation is what finally got to Carol Palmatier, author of 10 Little Rules for a Blissy Life. Palmatier was on the forefront of the WAHM movement, just as the Internet began to make it more accessible in 1996.

“It was kind of cool that I started to make a career out of this uncharted territory,” Palmatier says.

When her daughters were small, taking care of them and her business kept her non-stop busy. But when they went off to college, they left a huge void in their wake.

Her solution? She rented office space in downtown Brighton, where she now works at least once a week to meet clients and spend time in the outside world.

Although working from home “is not for the faint of heart,” she urges other moms to take the WAHM plunge if that’s their idea of bliss.

“The rules that you’ve been handed, the 9-to-5-put-the-kids-in-daycare, if that doesn’t work then somehow find the courage to step up and make your own rules,” she says.

But don’t be fooled. Even though Palmatier has actually worked from a beach, spending two months in a cottage on the Gulf of Mexico without missing a beat, the WAHM life is far from laid-back.

“In all the years I’ve been at home I’ve never worked harder in my life. We have extra to prove. We can be just as professional, just as efficient, just as good at what we do but in our flip-flops,” she says. “We’re for real here.”

Get some tips for mindfulness – whether you’re a WAHM, SAHM or working mom.